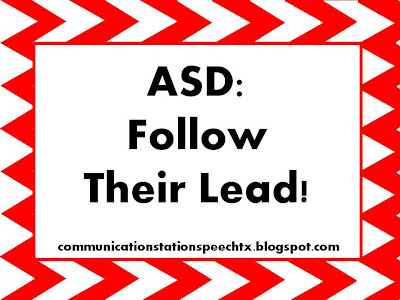 Following a child’s lead may just the be BEST thing we as SLPs can do for your students with ASD.  As previously read in the post I shared about Dr. Greenspan’s DIR and Dr. Solomon’s P.L.A.Y. Project, following a child’s lead is one of the fundamental principles of both  programs.  So if I’ve already talked about it why am I posting this again?  Because I want to make it very very clear HOW IMPORTANT this technique is with your students with ASD.

What does it really mean to follow a child’s lead?

Well the way I interpret this is to do what the child is doing!  That’s pretty simple right?  Now how exactly do I do this?  Here are my 3 simple steps:

1.)  Have 2 of everything:  I personally begin by laying out a box of toys in the middle of the room (taking away all other visual distractions as best as I can) and I let the student take control.  In the box I have several different types of toys and I make sure I have 2 of everything.

2.)  Monkey See, Monkey Do:  When my client picks up one of the toys I pick up its twin and I play with it the same way he/she is playing with it.  If my client is sitting on his knees pushing his forehead against a squishy ball on the floor, then so am I while simply saying “squish”.  If my client is dropping his echo microphone on the ground and laughing at the sound, then so am I, while simply saying “bang”.

3.)  Create a VERBal Routine:  When a child enjoys an activity, he/she will do it over and over again and so will I while saying that same one word utterance over and over (creating a routine).  After some time I begin to hesitate before producing that one word with the expectancy that the child will vocalize it.  If the child doesn’t, no big deal, I just model the word again and again until he/she does.

As you can tell, most of these one word utterances will be verbs (a description of what we are actually doing with the object).  I find that verbal kiddos with ASD learn fairly quickly that objects have labels but struggle with understanding verbs.  This way they begin to understand verbs because we attach them to the actions we are exhibiting.

Always look for more while raising the bar!

As the child beings to play with more toys and say more words, I expand upon those utterances and look for things such as spontaneous productions, eye contact, facial referencing, emotions matched with correct facial expressions, typical prosody and intonation in play (less robotic or flat), initiation of play or conversation and participation in reciprocal, parallel, cooperative, and even collaborative play.

I know what you are asking yourself.  Can you really see all these skills just by following a child’s lead?  YES!  All of these skills AND more!

Here’s a personal example:
I began working with a primarily nonverbal PK age child that would later be diagnosed with ASD.  I initially “reached” him using some DTT principles as no other technique worked at the time.  But I found very quickly (within the first few months) that for him, his responses were very robotic and were not generalizing to other environments.  So I began play therapy with the focus on following his lead.  Within 4 weeks, this child went from 0 spontaneous utterances during a therapy session to consistently over 20 spontaneous utterances.  And these utterances were used for various communicative purposes: commenting, informing, greeting, describing, showing, gaining attention…etc.  His prosody and intonation were more dynamic carrying appropriate emotion and pitch changes.  In addition, his parents began to report noticing more talking within the child’s home environment, demonstrating generalization (when we never even focused on using these skills outside of therapy at that point!).

So does this technique work?  YES it very well can.  It may not work for every child or it may work at different periods of development for a child but yes, yes, yes, it does work.

And THAT is why I needed to write this post…because it really is so so important to FOLLOW A CHILD’S LEAD!