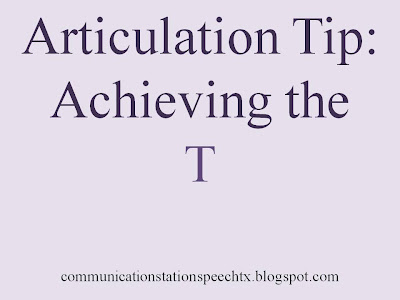 I was in a conversation recently where I was asked what are my tricks of the trade so to speak to get a child to make the “T” sound when they have the tendency to back that sound to a “K”.  So I thought I’d share them here for any other parents that might be working on this as well.

1) Explain the difference between the current sound and the sound you want:

The first thing I do is explain the difference between the sound the child is currently saying verses the sound I want him or her to say.  So if they are producing “K” for “T” I will explain that the sound the child is producing is coming from the back of their tongue touching the roof of their mouth and I will place their hands on my throat to feel how the sound comes from the “back of the mouth” and the “throat” region.  But the sound we want to make comes from the “front” of our mouth using our tongue tip.  Then I place their hand in front of my lips (not touching my mouth) to have the child feel the air flow coming out of the front of my mouth when producing “T”.  So before we even try to produce “T” together we need to make sure the child has some understanding and control over their tongue tip (Tip: during this time I make sure the child can stick out, point and lift tongue tip up and down to make sure the child has control and knowledge of what the tongue tip actually is…it only takes a few seconds and a mirror for children to understand where their tongue tip is and how to move it).

2)  Explain how to use one’s articulators to make the target sound:

So for the “T” sound I usually explain that it is made by having the tongue tip make contact with the upper front teeth.  I show this by opening my teeth a bit just to show the movement of my tongue.  Most times with the explanation, combined with one’s ability to control their tongue tip and the use of a mirror, the child can begin to model this sound in isolation with ease.

However, there is the more rare occasion when the child has been backing so long that he/she does not know how to control his/her tongue tip to make contact at the front of their mouth. So we move to step 3.

By placing a straw between the child’s teeth (without having them bite it) the child can use the straw as sensory feedback to produce the “T”.  This typically works very, very quickly because it is natural for our tongues to migrate toward foreign objects in our mouths.  The problem becomes translating that action to producing the “T” sound without the straw.

So after the child can produce a distorted, but definitely a “T” sound with the open straw, then have the child bit on the straw, so the straw is flattened in their mouths (just in between the front two teeth) and have them produce the “T” several times over (I like the 10xs/row rule:  10xs/row for at least 3 trials before moving to the next step).  With the flattened straw you want your child to pay particular attention to how it feels to touch his/her teeth when making this sound as well.

And that’s it!  Once they can make the sound in isolation, you can practice in VC (vowel-consonant syllables), (I like working on final consonants 1st as it is usually easier for children to add their target at then end without reverting to old habits) and then in CV (consonant-vowel syllables).

Remember: you may have to segment the target sound (break the target sound off from rest of word) initially before your child can produce it fluently without adding their substituted sound.

Most Importantly:  Be patient, celebrate the small achievements (b/c NO achievement or improvement is small), and have FUN!!!!  The sillier you are the more fun your child will have!