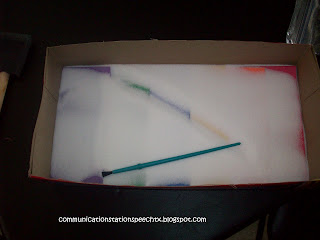 Once I saw it, I imagined so many wonderful ways in which communication could be facilitated just by this one activity.  I was so inspired, I just had to “play”.  So I grabbed a box, some construction paper, salt and a few paintbrushes and got started.  My son is a clever guy.  He tends to come up with WONDERFUL ideas I would never think of, so I enlisted him in this play activity and…well…here is a list of 12 activities we came up with:

Pre-academic Vocabulary Development:  (colors, numbers, etc.)
1.)  Colors:
The most basic idea I initially had was how this box of rainbow colors lends itself to learning and talking about colors.  I started by uncovering a color strip and my son would label the color.  (If your child does not yet know colors, simple label them for him/her, with much excitement.  E.g.  “Oh my, we found BLUE!!!”) 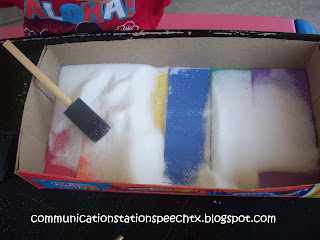 We extended this activity to search through our “telescope” (a.k.a. paper towel roll with contact paper, with patterns, covering it) to find objects that were the same color! 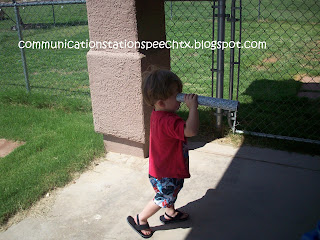 2.)  Numbers:
Then we counted the number of color strips in the box and I wrote the numbers (one on each strip) accordingly. 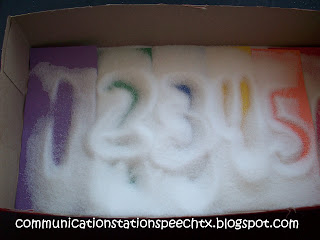 We extended this activity by me writing and labeling a number in the box and my son worked on counting out the same number of a specific object in sight (in this case…the number of strawberries correspond to the number 3 in the box).  Your child cannot count yet?  No problem.  You take his/her hand and use hand over hand modeling while counting out the corresponding number of objects!  The goal is to expose your child to this vocabulary for the purpose of language (and in this case, academic development). 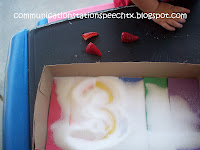 After a few minutes I pulled out some foam numbers and letters and we added them to the salt tray of fun!

3.)  Letters (articulation and phonological awareness!!!!):
Adding some hidden letters in the tray lent itself quite rightly to working on phonological awareness skills (we uncovered the hidden letter, named it, talked about the sound it makes, and talked about other words that belong with that letter).  Lots and lots of modeling during these games helps with exposure. 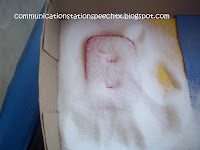 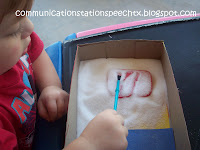 If working on articulation:  you can think of words that begin or end with the target sound and have your child try to imitate.  Also hiding pictures or objects with your child’s target sound in the tray and have him/her label them once uncovered could be a fun game!!!

4.)  Shapes:
I attempted to make shapes in the box (my star was a terrible sight to see but I give myself an “A” for effort) and my son would identify them.  If your child does not know shapes yet, just focus on exposing him/her to them by labeling them yourself! 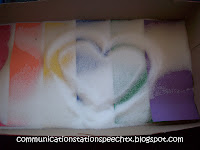 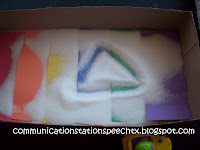 Of course we extended this activity by getting our trusty “telescope” out and looked for objects that have the same shape in our surroundings.  In the picture below, my son, found a star on our sensory table after I drew (a very sad attempt) a star in the rainbow box. 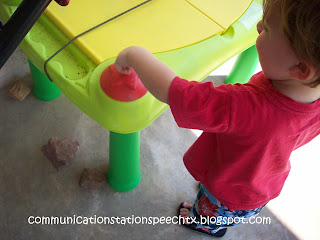 Receptive Language Task:
5.)  Imitation game:  in the perfect world my son and I would have had our own rainbow boxes so we could imitate each other’s drawings (at his age, it is mostly lines, circles, squiggles…but for older kids with more fine motor control and visual/spatial orientation, more elaborate drawings could be imitated).  Unfortunately, I didn’t think of it prior to this activity so we were “sharing” the same box and I started out by imitating his lines, followed by him trying to imitate mine.  This was a great opportunity for me to use descriptive words such as “squiggly, curvy light/soft, hard, round,” etc. (E.g. “I like how you made a squiggly line just mine.”  or “I think that line is too soft/light.  I can’t see it.”).  You can see, my son is trying to imitate a curved line below and doing a pretty good job of it! (by the way he then looked at the two lines and called it “a road” and….you guessed it…then asked me for cars so he could drive on the “road”…which of course lead to a whole new activity with the rainbow salt tray!  see that activity below) 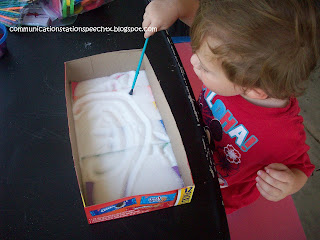 Direction Following games:
6. and 7.)  Simple gross/fine motor directions as well as Sequential directions:  I attempted to further focus on receptive language skills by adding directions throughout the various activities we came up with that day.  Simple directions such as “draw 1 line”, “draw a circle”, or more complex directions such as “First draw a circle, then draw a line”, etc. focus on listening, attention, comprehension of the language used and of course working memory (can your child hold that direction in his/her head long enough to execute it).  To do this task you want to make sure your child can follow some simple directions at the very least and use his/her strengths as an asset to this game.  For example, my son really enjoyed trying to draw circles so when I wanted to practice a 2 step direction, I started out with something I knew he could and wanted to do followed by a another direction (e.g. “Draw a circle, then a line”).  Notice in that example I used only one sequencing word, “then”.  Because of where he is linguistically, my son would have struggled if I created a “first/then” direction so I chose to simplify in order to improve his chances of success.  When in doubt simplify!!!!  Once that skill is mastered (mastery is considered >80% accuracy or 8/10xs), then you can increase the complexity of your directions!

8.  Prepositional phrases (locational directions):  You can also use objects with which to make directions about.  I started this after we began bringing in other toys to play with in the tray.  E.g.  “Pick up Lightning McQueen and put him in the box”.  Or “Get the paintbrush under the table”, etc.  You may notice that these directions are more complex in nature but they don’t have to be.  You could simply have your child place objects you name into the box or in various places around, under, between, the rainbow tray and other toys which focuses on understanding prepositions (location words).  Another great language skill!

Global Language (receptive and expressive) Activities:
9.)  Categories games:
Another great way to organize vocabulary in our brain is to work on categorizing objects (by function, location, shape, size, or other attributes).  During Rainbow Salt Tray play today I had this “brilliant” idea that I would “draw” a few objects in one category and describe if for my son to guess.  Can you tell what these things are supposed to be? 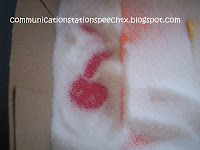 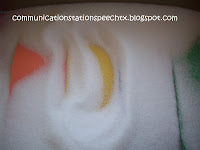 If you answered “cherry” for A and “banana” for B you’d be correct!  As my son had some strawberries as a snack on the table, I thought I’d take that opportunity to talk about the kinds of foods we eat, particularly fruit and could he guess what fruit I was making.  I tried to make the fruits on the correct color strip and he was surprisingly pretty good at naming foods, but not so good at looking at my “artistic” drawings and labeling the correct fruit.  But, that’s OK!  Remember: EXPOSURE and language facilitation is what our goal is.  If you are having fun laughing, talking, and playing, than the activity is successful.  My son, thought these pictures were hilarious and proceeded to tell me what I actually drew (according to his mind and that was PERFECT!  Talking talking talking!  That’s the goal!).

10.)  WH?s (what, who, where, why, how, when):
Abstract drawings and forming shapes with a paintbrush in salt, lends itself to this language activity: asking and answering WH?s.  “What are you making?  Where does mommy keep that in the house? Where can we buy that?”, etc.  Remember:  if you child is just beginning to answer WH?s, the more concrete questions the better.  And if he/she is answering in single words, you can expand upon their utterances. (e.g. Adult: “What are you making?”, Child: “A ball”,  Adult: “Oh, you made a ball!  Its blue! What can we do with a ball?”,  Child: “Throw”, Adult: “That’s right!  We throw a ball.”).

11.)  Road Rally (or other pretend play):
As I stated above, my son thought of the brilliant idea to get some cars and drive through the salt “streets”. 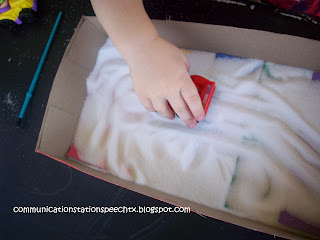 During pretend play, there are so many ways to elicit language:  self-talk, parallel talk, expansions, etc. (if you don’t know what these techniques are, read my blog titled  Parents: What you can do right now to improve your child’s language). The most important thing is to make sure you and your child are having fun and playing together!

12.)  Hidden Objects:
Hide some objects in the salt tray and let your child go on a treasure hunt.  When he/she finds the objects, have him/her label them and talk about them.  We have been talking a lot about bugs so I decided to add some dollar store bugs to the mix.  We had a good time playing talking. 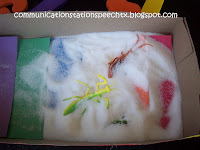 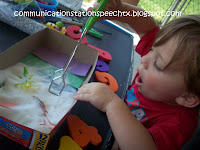 Other things we learned “accidentally” through play: 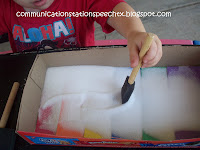 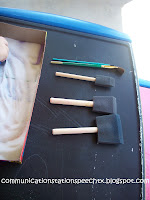 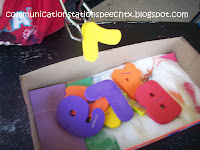 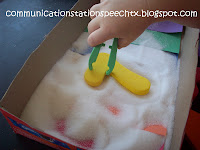 Tips for parents: (these are things I learned through trial and error today)

This is by far an exhaustive list of activties to do with this salt tray!  I’m sure you can come up with many more ideas!  Feel free to comment them below!  Be creative and happy “Painting”!!!!

**Important:  the above list is just a few ideas for language facilitation.  If you are working on specific language goals, talk to your speech language pathologist about the best way to use this activity to toarget your child’s individual goals.**